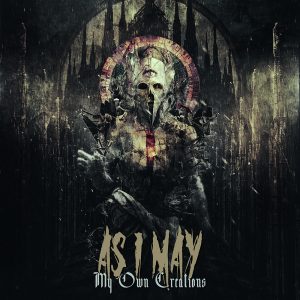 Formed in Mikkeli in 2016, AS I MAY, is a four-piece Finnish modern metal entity whose sound and musical personality is manifold. The band has quickly evolved with their 2016 single release, “Disease”, followed by their debut album, “Speak No Evil” in 2017 and another single, “Hero”, promoted the same year.

Their sophomore full length, “My Own Creations”, was released on July the 26th 2019 worldwide via Rockshots Records and on July 24th in Japan via Spiritual Beast.

AS I MAY consists of Tipi Nokelainen on Bass and Clean vocals, Lasse Hiltunen on Guitar and Scream vocals, Jani Valhola on Guitar and Backup vocals and Marko Korhonen on Drums.

Click HERE or on the name for an interview with Lasse Hiltunen.

“My Own Creations” could not be a more fitting title for the album: the identity of AS I MAY is branded into each song and every title is an original composition.

There is a wide array of subtle tones ranging from dark goth, edgy industrial to high-power metalcore. The multi layered instrumentation blends in with complex vocal lines, generating a busy, detailed atmosphere, seamless styles alternations, all woven into a perfect dual helix of aggression and musicality.

Diehard fans of the Finnish metal scene (and not only metal) will be familiar with the soaring choruses, minor key driven refrains and overall ample melodies.

Each rhythm and style that is incorporated implies a specific instrumental or vocal implementation and technique, and with each instance the execution is spot on.

The rhythmic section thrives on permutations : accent shifts, various styles integrated, every change in rhythm or tempo is carefully built and fitting orchestration follows and enhances the tonality and mood.

The guitars are clad in several clean modern distortion sounds and are subjected to the same dynamic cadences: tight djent like riffing, core style palm muting, neo-clasical insertions, soulful passages and a great balance between the lead and rhythmic pieces, for additional dimension and grit.

The writing and mixing finesse puts the spotlight on myriads of other rich instrumental details: besides how the guitars, bass and drums are wielded to express each melodic or heavy passage, you can expect different effects and tones with synths / keys on pretty much all of the songs (Cure Is Worse Than Disease, Silent, Loud), cello and piano inflections (Necessary Evil), and even a deep sax that builds up and blends into the song finale (I See You In Me).

If you paid attention at the beginning when the band was introduced, you may have noticed that the vox is threefold: this is fully implemented on “My Own Creations” and you can feel the interchange of the elaborate choruses and bridges. There is a synergy between the clean and the growls, each timber, register and vocal style, and subtle melodic dubs are panned and mixed occasionally.

“My Own Creations” is a very mature and prismatic album, in that it has a macro and micro structure: each instrument skillfully showcases their specific responsibilities and also finely enhances any particular atmosphere or subtly outlines either of the incorporated styles, the rhythmic segment is a constant variable that changes signatures and tonalities, and the memorable ascending, inspiring vocals make each song stand out and be sung out loud!

If music could be represented in a 3D manner, AS I MAY may have just added that dimension with “My Own Creations”.

As I May Online: