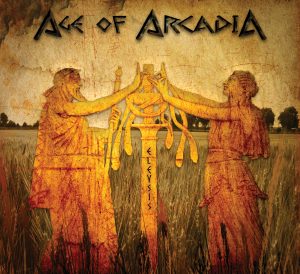 Age Of Arcadia is a Hellenic rooted – German based Death/Thrash Metal quartet established in 2017 by their cathartic musical odyssey of over 20 years. The lineup and style changes experienced along the journey, not only consolidated the stoic personalities and passion for music but also defined and perfected their distinctiveness.

Age Of Arcadia is based on the ideal of Arcadianism and a revolutionist view that suited the band’s consolidation and direction (click HERE for a detailed Age Of Arcadia interview).

“Eleysis”, is a full-length material released in 2018, that can be largely characterized by a “classical”, old-schoold structure, melodic aggressiveness blending technicality in a very dynamic manner, a keen attention to details and strong lyrics.

The lyrics are vivid and erudite that they resemble actual frescoes, depicting mighty ancient Greek historical episodes, decorating each song with themes like mythology, cosmogony, philosophy, promoting the ancient Greek civilization and the great Arcadian Idea.

On the overall, the sound and style on “Eleysis” shows off an old-school backbone, while not being cliché and avoiding audio déjà-vu’s. There is a clear intention to let each instrument speak and be heard, with guitar driven songs and full built, complex written guitar solos, resembling the late 80’s – early 90’s structures. There are gradual permutations throughout “Eleysis”, and no instrument or part of the songs is rigid.

“Eleysis” radiates obvious thrash metal features, however, the album is so mature,  complex and authentic that – as always – it is useless to try to pigeonhole it just for the sake of adding a label.

The guitar can be seen as a secondary lead singer as it voices antipodal moods and tones, from melodic emotional guitar solos and plucked ambient oriented insertions to dissonant passages, tritone dueling, neoclassical influences and full bodied forceful riffs. It showcases various techniques and styles extensively and employs effects and tones to suit each theme and mood on every song.

The rythmic section contributes to the thrash structure with a relentless double bass drumming and compact bass lines that drive the songs through various tempos and give the album a dynamic, live feel. Each song exhibits either a new key signature or a rhythmic melodic alternation, subtle changes, giving it a kaleidoscopic movement feel.

To top it off, the vox segment bleeds out thrash metal choruses and melodious refrains, covering soft spoken passages, aggressive, uninhibited manifestos, traditional touches, summing up to a powerful performance.

It is a very instrument-driven material and resembles a conceptual album, in that, each song can be a stand alone piece and still fit in and contribute to the unique overall picture. With its substantial compositions, “Eleysis” has a particular wall of sound surrounding it and it exudes a live-feel energy.

The songs and the production are perfectly balanced, nothing is either overdone nor underdone, nothing is thrown in hastily. There is room for carefully placed details or on the contrary an emphasis on well planned simplicity. Age Of Arcadia‘s page in history is being written with virtuosity and originality woven in both the soft and the aggressive nature of their panegyric, “Eleysis”.