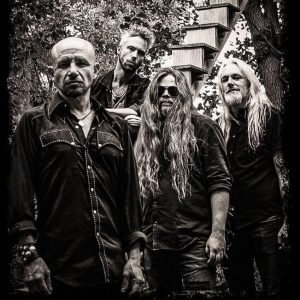 THE ROAD is an experimental rock/metal super-group formed in 2017, after having shed their previous skin known as Road To Jerusalem.

Although THE ROAD is based in Copenhagen (Denmark),  it is comprised  of international musicians, with a strong artistic background: Josh Tyree (USA) the powerful, groovy, soulful voice fronting the band, Michael Skovbakke (Denmark – Konkhra) Guitar wielder, Andreas Holma (Sweden – Hypocrisy, Scar Symmetry, Soilwork) Bass master and Per Møller Jensen (Denmark – Invocator, Konkhra, The Haunted) backing everything up on Drums.

Sit back and enjoy an interview with Per Møller Jensen as we try to cover the band’s past and future as well as generic musical aspects.

As usual, a huge *Thank You* to the band for their time, openness and availability!

MAtW – Warm greetings to everyone in THE ROAD and thank you for taking the time to talk to Metal Around the World! Let’s start!

PMJ – Thank You for having us at Metal Around The World.

MAtW – THE ROAD is comprised of experienced musicians with various musical backgrounds. Can you, please, quickly introduce the band for the fans that are new to your band?

PMJ – The Road consists of Michael Skovbakke on Guitar (ex-Konkhra), Andreas Holma on Bass (ex-Hypocrisy, Soilwork), Josh Tyree on Vocals, and myself Per M. Jensen on drums (ex-The Haunted).

MAtW – Is THE ROAD your main focus or are you still active in other projects as well?

PMJ – The brotherhood in this band got real strong immediately, and we knew we all wanted to and had to make this our main thing. So at this point we don’t have projects going besides The Road.

MAtW – How did the collaboration start, seeing that the band has a location trifecta: Denmark, Sweden and the US.

PMJ – Well, after I left The Haunted in 2012 it took me a while to land on my feet and adjust to a new reality after 13 years of constant recording and touring. I met Michael after returning to Copenhagen and we formed a good friendship, that evolved into the idea of doing something together. I got a recommendation on Josh through a mutual friend, and he was exact voice we were looking for. Andreas was also recommended to me, and he just basically owned the bass gig immediately. So basically being picky as we are, we just wanted to create the the sound we were looking for, and have the right, qualified people to do it with. We get together and write, jam and play shows and record regardless of the distance between us.

MAtW – What is the writing process like, in The Loft?

PMJ – Songs will often start taking form from a specific idea, could be a drumbeat, a chord progression, a vocal line…even just a feeling that we will try and express… Sometimes its a jam taking us there, other times rough ideas are recorded straight on the computer and we will work it out like that. There is not one specific way to do it for us.

MAtW – How did the name change occur and why?

PMJ – We started to realize the amount of confusion over our old name, which was never our intention forming this band. It was never intended to be either religious or political in any way. We went for a shorter name, still keeping the main word…The Road.

MAtW – Is there a leader in the band?

PMJ – No, I wouldn’t say there is a leader, but just like any group of people we have our forces and weaknesses individually and with us all that seems to happen very naturally.

MAtW – The meaning of the band name, the emotional / musical journey is very fitting. At this point and with the current lineup, do you feel a comfort when writing music and spending time together?

PMJ – For sure. I think so too… We are definitely enjoying just writing these days, experimenting, a little more free than what we have been accustomed to in our previous bands. Something that we needed as musicians too…

MAtW – You are working on new material. Any details?

PMJ – The debut record is under the Road To Jerusalem name, seemed to reflect what had been going on at least for me, leading up to that point. Playing free, with a lot of freedom under control for all musicians…seemed to have a cleansing effect…however with that record being done, we made a conscious decision to write in a more inclusive way for the listener. Somewhat more direct and intense…and heavier.

MAtW – The first release of 2019 was a great new video for “John Henry”. Can you share some of the details behind the making of it and the crew that made it possible?

PMJ – When we shot the video for “John Henry”, we wanted the location in this performance video to somewhat suit the lyrics for the song. As John Henry was a slave set free, but remained working in the railroad build, it made sense filming the video around train tracks, and generally just happy with the result. Mariam Zakarian directed, shot and edited the video, as she also did with the song “Dead Eyes” coming out later this year.

MAtW – How did the collaboration with Tue Madsen and Mariam Zakarian/Visual Art come about?

PMJ – The collaboration with Tue was probably a result of a long history with my former band The Haunted and Tue. He did several of our records, and I always enjoyed working with him, also in the recording process. He has great ears and a good sense of when a take is a take. It feels like home working with Tue Madsen, and we intent on continuing working together. Mariam and Visual Art is our first time working together. We are very pleased with the result. “John Henry” being the first video, “Dead Eyes” shot around the same time but will have a completely different mood to fit that specific song.

MAtW – What is your opinion on musicianship vs. ego?

PMJ – Well, its quite simple, turn the ego up, and the music will suffer… if you play for the song, or play to satisfy your own ego, or your own perception of what your instrument is supposed to be doing all the time. Play with balls, conviction and attitude, but always play according to the music. …that is my philosophy…  I am not into the shredding thing either… there is to me, a very fine balance between playing with emotions or let technique take over and lose the feeling…

MAtW – Is the “discovery” of music associated to the instrument that you are currently playing or did you later develop a preference?

PMJ – I discovered music at a very young age myself, listening to metal bands before the age of 10. My childhood friend and I had already started playing, I started singing haha… kept doing that on the side, thru early teenage hood, but early on I found the drum set to be my instrument.

MAtW – What are some similarities and differences between THE ROAD the musicians and the people behind them?

PMJ – I generally believe the musicians and the way we play is an extension of our personalities…. I guess, one difference could be that in the music we are all very disciplined… in private that might not be the case so much haha!

MAtW – Are you considering any collaborations with other musicians?

PMJ – So far we have not really had that as an idea, no.

MAtW – What is the main thing that you want to transmit to your fans?

PMJ – I think getting a lot of different feelings across… it’s all about life, music is, so should be the feelings we portray in our music. I like to give people a sense of empowerment too, just like I get myself through certain music.

MAtW – What is your current rehearsal schedule and practice routine?

PMJ – As we live in different countries, our schedule is compressed into 3 month intervals, so that is when we rehearse/prepare for shows… recording and so on… as for the two times a week or something, that’s not our thing… also we have come to a point in our musical lives, where we don’t necessarily need to constantly play our songs, but rather practice our set prior to which ever engagements we have.

MAtW – What s next for THE ROAD?

PMJ – The next video (lyric video) is out beginning of September, and two more videos are released later this year. We are doing a few shows in Denmark and Sweden, as well as entering the studio again recording more material. We are preceding without a record label for the time being, until something interesting pops up, that can take the band to the level we need to be.

MAtW – Could you share some of the best highlights so far?

PMJ – The highlight for me was just actually getting this band gathered, these 4 individuals together, and finding out how great the chemistry was.

MAtW – Do each of you prefer the writing part or the playing?

PMJ – We all enjoy the creative process, but playing live is where its really at.

MAtW – What the biggest strength each of you has on the instrument you empower?

PMJ – I must here speak for everyone… the urge and strive to play for the song, always.

MAtW – Can voice be seen as an instrument?

PMJ – Oh yeah, I would say so…. I mean people like Ella Fitzgerald, singing these amazing leads, just like a sax player… it is the voice of the music…

MAtW – Name a piece of gear you could not live without?

MAtW – Do you make music for yourselves, as a natural means of expression and manifestations,or for others first?

PMJ – I think for ourselves, in the sense that we are very picky what to say and do/play, and there is an inner artist that needs to be satisfied, always… Also with listeners in mind of course, everybody who claimed differently playing any type of contemporary modern music, would not tell the truth if claiming otherwise.

MAtW – How are the opinions shared on old school physical releases vs. digital?

PMJ – Well, I am enough of a dinosaur to have grown up with vinyls, and all that magic…. so obviously I would prefer that. However it’s another time, and we, musicians just need to accept that times have changed.

MAtW – Time for the last question, THE RANDOM QUESTION: if you could steal credit for any song / movie / idea / invention – what would that be?

MAtW – Thank you all, once again, for this talk and if there is any message you would like to send out or mention anything and anyone else, please do!

PMJ – Thank You so much Cristina!