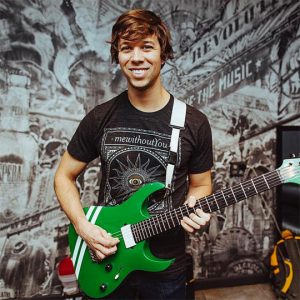 We just finished up our new album and did a short tour in Europe. We are currently at home prepping for the release of our new album and preparing to spend the summer on the Van’s Warped Tour. Lots of preparation and practice.

It is 100% finished. I’m really happy with how it came out. I think people are going to enjoy it.

It was awesome! We’ve been working off and on with Carson Slovak since we first started recording music. Carson was responsible for the original demos we submitted to sign with Solid State Records. He also recorded our entire holiday album “Sleddin’ Hill” so we’ve worked together a lot. Grant has helped out on nearly every project we’ve done with Carson so they were a no-brainer for us on Rescue & Restore. We’re comfortable working with them and they are based in the same area we live so it was very convenient.

Carson and Grant both worked with our drummer Matt Greiner to start to project. Once drums were done Carson spent his time working on guitars and bass while Grant worked with Jake on vocals in a different room at the studio. It was a great system that helped us maximize our time while still generating the best material we could put down.

As always we try to write meaningful and positive lyrics. There are a lot of bands out there with really awful dark and disgusting lyrics that glorify substance abuse, mistreatment of women, etc. We are not about that. We want to influence our listeners in a positive way. There are a lot of young people who listen to ABR and we feel it is our responsibility to be a positive influence on them.

My goal when writing the music to this record was to make each song sound different from the others and to avoid certain clichés I felt we had overused in the past. I wanted to push our sound as much as I could while still writing a fast and heavy album. We incorporated a bunch of stringed instruments and midi samples along the way and I think this album is our most interesting and varied record to date. It isn’t an album that you will fully appreciate on first listen. I think after a few times through it you’ll begin to understand and enjoy the songs on a whole new level. There’s a lot of substance and meat to this album.

We have been thinking about the genre of metalcore a lot and have seen what it has become over the past few years. We aren’t happy with how stale the music and message has become. Too many bands are just copying whatever is “cool” at that moment instead of trying to innovate and push the genre to new place. Rescue & Restore is about saving an oversaturated and boring genre and restoring it to how it used to be, which was a cutting edge and exciting genre. We want to challenge ourselves and our peers to do their best to think outside the box and breath some new life into this style of music.

There are a lot of different stories out there about the origins of our band name. I won’t say anything else on the topic.

They don’t conflict at all for us. Metal is a style of music, not a religion. Lyrics would be what would make music Christian or Aethiest or straight-edge of whatever. We were a bunch of Christian kids who liked heavy music and we started a metal band. That’s all there is to it. Anyone who thinks there’s no such thing as Christians in metal music is probably over 40 years old. Times have changed. If someone says that metal music and Christianity can’t go together they need to stop taking the meaning of “metal” so seriously. It’s just a style of music.

10 Talk about your relationship with God while on the road and the temptations that arise while touring?

Each member in ABR has a different relationship with God and handles that relationship in their own way. By temptations I assume you mean partying, drugs, women, etc. That isn’t something that’s hard for us to avoid. It never has been. We are a very grounded band in our views. We are close friends and have the same friends at home. We keep each other accountable and it would be too embarrassing and dishonorable for any of us to go out and cheat on our wife or girlfriend with some fling on tour. We’re simply not about that lifestyle. We have fun on tour but we are responsible with our actions.

Yes, water is one of the single most important ingredients in sustaining life.

I try my best to play my guitar for a half hour or so before hitting the stage. Sometimes more, sometimes less. Depends on how I’m feeling that day. I have to get my fingers warm and moving or I won’t play well. I can’t just pick up my guitar and play our songs without first warming up. We all try to stretch and get our heart rates up a bit before we get out there. After all these years we don’t need much help relaxing before we get on stage. Most of the day before we play is spent relaxing so by the time the show rolls around we are ready to get out there and play.

They’re a great label. We’ve been with them since 2005 and they’ve done a great job since day one at making us feel important and welcome. Nothing but love for all our friends there. They even pay us our royalties, which I don’t think a lot of bands can say about their record labels. They’re good people that run their operation with integrity.

That’s what everyone calls us so we just go with the flow. Who cares?

Today’s metalcore bands generally are really bad. Like I said earlier, the genre isn’t exactly flourishing with creativity. A band from England called Architects stands out to me. They are trying to do things a little differently and are more inventive than most bands. I thought the same for Misery Signals and Protest the Hero. I’m sure there are more out there. Between the Buried and Me, while hardly a metalcore band, is a great inspiration to me. They don’t worry about any silly rules of music. They just write what they want and they do it well. I think a lot of bands could learn a thing or two from them.

I don’t have time for side projects.

I assume you’re talking about bands I would consider a guilty pleasure. This concept has always been hard for me to understand because if you like a band or an artist, why feel guilty about it? I really like Matisyahu. I don’t feel guilty for it but he’s unlike any other artist I listen to so maybe that makes it a guilty pleasure by definition. I don’t know. I listen to a lot of different bands. I don’t feel guilty for liking any of them.

I would like to play Romania! I would thoroughly enjoy doing an extensive tour of Eastern Europe. We have talked about it. I love going to places we’ve never played before. One day! Thanks for checking us out.