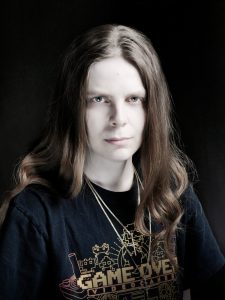 MAtW – Hey Ari, thank you for taking the time to do this! How are you?

I’m pretty good thanks! Stoked about the summer raising it’s head, although it’s gray and wet at the moment.

MAtW – Amoral will release a new album by the end of this year. Is postproduction currently underway?

Guitars are re-ampped, I’m guessing mixing is the next step so we’re on schedule 🙂

MAtW – Are we talking about a conceptual album, after all?

MAtW – Could you share some more details? (Perhaps the title, a hint to it, some tracks or the concept?)

We actually don’t know the title yet, and as for the tracks, there are eight tracks and one bonus track for Japanese release I think. We played two new songs live in Helsinki a couple of months ago, one of them was an instrumental song, that’s about all I can share 🙂

MAtW – How did the collaboration with Marco Hietala come about?

I’m not sure about the specifics, but I know that Marco was interested to produce the last two albums as well but was busy at the times of recording schedule. I love Marco as a musician and as a friend so I was happy that we got a chance to do it this time.

MAtW – Janne Saksa at Sound Supreme has been with amoral since 2005, I guess by now he was a natural first choice?

Janne is a great dude and a wizard in the studio, this time we decided to try a different approach with the recording and producing so the only thing we did with Janne was the drum recording.

MAtW – Will Ben (Varon) also be co-producing this album?

As far as I know Ben is the producer of this album and the only “co-producer” besides the band is Marco with the vocal producing.

MAtW – What is the story behind “Amoral” the band name?

What I’ve heard, back in the days the guys just needed to pick a name, everybody had some ideas and that was picked ’cause it sounded good and started with the letter A getting it at the top of alphabets 🙂 So no in-depth story behind it I’m afraid.

MAtW – Describe a day in the studio and a day at rehearsals with Amoral.

For the studio days, you should check out our video blogs from the last album athttp://www.youtube.com/user/amoralweb , or read the blog at http://amoralinthestudio.blogspot.fi . Rehearsals starts with fifteen minutes of joking around, five minutes of talking about band/music related stuff, then some actual rehearsing for about 1.5 hours, one quick cigarette and bathroom break and 1.5 hours of more rehearsing. That’s about it usually, the duration varies of course.

MAtW- Would you say that over the years your vocal style has influenced the melody and instrumental parts or the other way around?

It goes both ways for sure. As for my influences, I think the stuff that influences my vocal style and singing in general the most are game music (they are instrumentals 99,9% of the time) and electronic/rap music, other vocalists singing style or melodies doesn’t really influence me at all nowadays, and that’s how I’m planning to keep it. I enjoy listening to different styles of singing and music but I want to sound like myself, not like Dio or Anselmo, they are/were the best at what they do and no one should try to copy other peoples style.

MAtW – With “Beneath” (released 2011) Amoral sounded at times quite prog-oriented. Should we expect the same approach on the new album?

Yes you should! We enjoyed playing the prog stuff and fans seemed to like it as well, so heck yes, why shouldn’t we do more stuff like that.

MAtW – Any update regarding your solo project, “Ari Koivunen”?

If you’re talking about “Ari Koivunen Band”, not really. We have been talking about it at times and wish to do something in the future but we’ll see when, maybe in a couple of years, maybe in ten, maybe never. The stuff we are recording with Mauro Gargano will be out later this year or next year, we still don’t know what we are going to call it, “Ari Koivunen” or something else. I’m really exited about that album as well.

MAtW – Which would you say is the best metal festival in Finland (and why)?

I would have to say Tuska, it’s close to me, the line-up is usually really good and the atmosphere is really friendly.

MAtW – What’s the best live show you have has so far?

Really hard to say but the Midi festival gig at Beijing was super fun! There are lots of others too but that is the one I remember really well since it was just some weeks ago 🙂

MAtW – How was touring Asia? You were familliar with the European crowds, had a try at the American audience too, and then you hit Manila, Beijing, etc?

It was great, I love Asia and actually I love touring abroad in general. In Manila we felt very welcome, the organizers took very good care of us and it was hot as hell. China wasn’t that hot but we had a greeeeat time there as well, hopefully we can tour in Asia again very soon!

MAtW – What was your biggest musical / vocal influence? How about nowadays?

As a kid my biggest influence was Metallica I guess, somehow I liked Lars’s drumming style (I was a drummer for a long time, started to sing when I was 19 years old) and Iron Maiden and Pantera were some big influences too. At the end of 90’s I almost stopped listening to metal but Slipknot’s first album and Pantera’s Great Southern Trendkill pulled me back fortunately. At the time I was mostly listening to punk and rap music. The biggest vocal influences back in the days were Dio, Coverdale, Plant, Dickinson, Joe Lynn Turner, Bach and mostly Jack Vitikainen. Nowadays, as I said, game music, electronic music, hip hop and other instrumental music.

MAtW – There are a bunch of side projects you guys are known for: Alavala, Crazy Mooses, Grease Helmet, Shear? Any news or any new ones in the near future?

Well, the stuff we’re doing with Mauro and all kinds of duo stuff. Crazy Mooses played only two gigs two years ago but you’ll never know if we do something again 🙂 Raskas Joulu (Heavy Christmas) of course at the end of every year.

MAtW – Progress is a natural process in a band. Would you still agree with Amoral being about “classic rock in the 21st century”?

That started out as a part joke but there’s a point, the bands that we call classic rock (like Led Zeppelin and Pink Floyd) played all kinds of music and are still just called classic rock, we play all sorts of rock music so why can’t we be the new “wave” of classic rock 🙂 Amoral is the first “Classic rock of the 21st century” band in the world!

I don’t drink beer but if I’d have to choose it would be Karhu. Hartwall Original Long Drink is my drink of choice 🙂

MAtW – Ari it’s been a pleasure talking to you. Hope Amoral will tour Romania soon after releasing the new album! Catch you later!