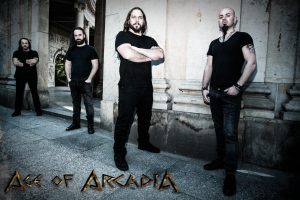 Just like a Phoenix, rising again from its own ashes, former group Insidead morphed and AGE OF ARCADIA was born.

As usual, a huge *Thank You* to the band for their time, openness and interest! Enjoy an in depth, mellow conversation with George Tsantilas, vox and guitars for AGE OF ARCADIA and meet the musicians and the actual people behind the onstage persona.

MAtW- Hello George, thank you for taking the time to talk to Metal Around The World! How are you?

I’m very well, thank you too for the interview, it’s an honour and also my pleasure.

MAtW – You have been doing music for over 20 years. After several line-up, name and genre changes, do you feel that with Age Of Arcadia you have reached a musical stability and band comfort?

We share the shame passion for music. We will never stop playing and making music. We can certainly say, that after a multi annual Odyssey, We have reached to the stability of our own Ithaca, which is the clarity of our vision, for which we intend to fight with our virtues, in order to contribute to the new growing wave of enlightenment. This is an adventurous journey, born from necessity, with absolutely no comfort, which however we intend to make with great pleasure, as long as we live. Odysseus lost ships and fellows to his journey but he reached to his destination. And we intend to reach it too.

MAtW – How did Age Of Arcadia meet and form?

We were firstly created from the ashes of the band “INSIDEAD”, which had successfully represented Greece to the magnificent WACKEN OPEN AIR FESTIVAL. The company we had signed with for the last album, went bankrupt and we had to wait many years for the copyrights. At the same period some impacts of the crisis led to several changes. I moved to Germany where my best friend “Kostas” (The Bassist) has been living for a lot of years now and together after a lot of struggling, we finally found the current members of the band, who were inspired from the mission and the esoteric meaning of the album, embraced our goals with responsibility, so they were welcome on board. I am pretty sure that this is the best line-up that I’ve ever played with!

MATW – What is the current line up of Age Of Arcadia? To make sure we “meet” everyone 🙂

MAtW – How would you describe briefly the other members of the band?

Actually, there is a common ground under our feet which is one of the most important things which lets our characters seem very similar at least to all serious matters. There is patience, persistence, the will to win the game and the attitude of “Never give up”, let’s say, to all of us. All of the above driven from a political way of thinking and management of whatever kind of situation which is called “Aristarchy”. That means the best in something leads the way and the others follow! I wouldn’t say details separately for each and everyone of us because we are team workers and we try as much as we can to put aside differences or whatever else could be kind of a problem for the band and its future.

MAtW – Your name is very visual and utopic. What inspired you to choose it?

It is the result of deep dedication in philosophy and years of attending in several seminars and lectures which led to the total redefinition of our lives and of the way that our revolutionism was being expressed as a band. We needed a new perspective in that, that could be a message worth spreading. In a series of some of these lectures I got in touch with the ideal of Arcadianism, of which I was enchanted. Also, helped a lot actually the fact that I come from “Arcadia” the mythical region in the centre of southern Greece. In my country, a new movement of enlightenment has just started to grow of which we enjoy to be a part. This ideal, which was of the basic components as renaissance and inspired the intelligencia of the whole world, philosophers and poets, appealed to me as an unlimited source of inspiration. The “Age of Arcadia”,represents the forecoming era of a world which can be an idyllic place. The formation of a future state of humanity which prospers, based to the values that the great philosophers have donated. Until nowadays, it seemed as a utopia, because the first renaissance wasn’t complete since the religion remained untouched. We now live to an era, that can welcome the rejection of all dogmas and salute an ideal, holistic aspect, to view cosmos, the universe. The ancient Hellenic cosmotheasis, pantheon and philosophy is nowadays the right hand of science. They are tools that sanctify every aspect of nature and of our life and help us to feel the secrecy in every part of existence, to show respect and grow our capacity of understanding the world. Tools for growing our mental abilities and of course the means to erase the gap between science and religion.

MAtW – Have you ever considered Greek lyrics to intensify the atmosphere and give it an extra mythical touch?

Of course I have considered that already and definitely we’ll have a lot of ancient Greek lyrics in the next album and a lot of surprises too… just be patient 😉 !!!

MAtW – There are a bunch of fests that you will participate in this summer (Pestbaracke Open Air, Burgbrand Open Air, Metal Frenzy Open Air). Any expectations?

We hope firstly to win the “Wacken Metal Battle 2019” contest and to have the honor to represent Germany at “WACKEN OPEN AIR 2019”. There are no other expectations at the moment, instead of enjoying playing our music in different places every time and meet nice people wherever we perform. (ed. Semi-finals were held on May 4th)

MAtW- How was revisiting older material and how did the re-recording process for “Ελευσις” go?

Actually it’s exactly the same album but with a brand new artwork. We decided to re-release “Eleysis” because as I mentioned above, the record label that we had at that time went bankrupt just a couple of months after the first release of the album. So, it was predicted move to not let it just out of the market and go for a next “new” album.

MAtW – You also handled the graphic part and artwork for the album. How would you describe your vision of the cover?

The cover is an ancient representation of the initiation process in the Eleysinian mysteries. Everything that has to do with the artwork stems from the ancient symbols and it intends to give a message for man’s evolution. Whatever is included to our current or forecoming material (music, graphics, lyrics) is a part of an unofficial ceremonial spiritual process based in Greek philosophy that leads to our self knowledge and realization.

MAtW – Why did you decide to go for Core Media Studio and Logan Mader?

The “In the core media studio”, was our own studio which doesn’t exist anymore. But a new attempt is in process, the “Arcadia Production” company. As about Logan Mader, we proposed the mix and mastering to him because we thought he would be the best at this moment to take over the project. But there was an amazing coincidence too. The place where his studio was located in Hollywood, was named Olympus and the streets were named “Hercules and Aphrodite’s street, if I remember well. So, it fitted perfectly!

MAtW – How is the writing process in the band? Does someone cover lyrics only and do instrumental ideas come n a jam or by individual ideas?

I am the main composer of the music but also the lyricist and that is because I started this band based on a specific concept, idea, as an extreme metal band with a lot of ancient traditional Greek elements according to the music and topics such as philosophy, mythology and history concerning the lyrics. The process is so far the same and it works pretty fine for me. I just write down my ideas on a paper and all kinds of information and knowledge which I can get, and then separately, I record all of my musical ideas (guitar riffs, voices in general, arrangements etc) to my PC. Then, the pre-production takes place and when everything is finished or at least almost everything… we’re ready to start the official recordings and enjoy giving birth to a brand new album 🙂 !!!

MAtW – What is your immediate goal as a band?

To enjoy every single moment of doing what we love and to spread luminous ideas to whoever is willing to receive it.

MAtW – Are you or the other members presently involved in any other side projects?

Our drummer works parallelly as a session musician and our guitar player is a member of another band too, called “Thunder and Lightning”.

MAtW – How do fans react live? Do you prefer the noisy headbangers or the quiet listener type of fan?

You can see any kind of reactions and both of these reactions are welcome. We don’t have a special preference considering our listeners, since every single person has it’s own unique way to perceive the stimulus throughout a concert’s duration, so we welcome everybody independently of how they choose to enjoy our music. Some enjoy to be mentally delighted and some surrender to the impact of the vibrations, the ecstatic expression of “Head Banging”. But what we like most, are those who come in touch for the first time with our music. This restrained enthusiasm and this sparkle in their eyes when their inner self finds something new to be identified with.

MAtW – Time for the random question: If you could be a Greek God – who would you be and why?

Divinity is characterized of immortality, unwithering, benevolence. Our human nature, is at this point deteriorated, that it would be arrogant and superficial even to imagine ourselves at this state. But every ancient Greek God, depicts with its symbols certain qualities and virtues which reinforce the divine part inside us which is the one that can offer us a place to immortality, to Olympus, through our tendency for great accomplishments. So, I would never choose only one of them because all these qualities are necessary. But if I would choose some to grow first, I would certainly choose those of goddess Athena. She is the Goddess of purity, prudence, wisdom and logic, she is a warrior and of course she is the one who is by the side of Odysseus in every difficult situation. She is very helpful to the hero’s path and behind every achievement. And of course to this decision helps the fact that I am of the opinion that if there would be only one deity, should be female something like the Big Mother.

MAtW – George, thank you so very much for this conversation! It’s been a thought provoking encounter and I cannot wait for the album to be released! If there is anything else you would like to add, for your fans and our readers please do!

I’d like to thank you too for our conversation, for giving me also the opportunity to express some of our ideas, to share with you thoughts and plans and of course a ” HUGE ” Thank You to your readers and our fans from the depths of our hearts because without them there would be no reason for us to exist as a band!!! Keep the Metal Music Alive!!! A.o.A.