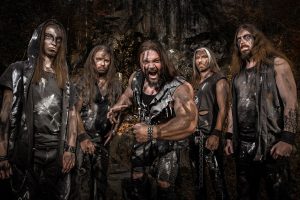 German “thundering metal armada” ASENBLUT shared some insight on their current activity in a short but “heavy” battle of questions, with Tim “Tetzel” Schmidt. Thanks again guys and enjoy!

MAtW – Morning, Tetzel! Thank you for taking the time to talk to Metal Around the World! How are you?

Thank you very much, I really appreciate your interest! I am fine!

MAtW – For fans that are new to Asenblut, how would you describe your sound and musical approach?

Our sound is a modern mixture of classic heavy and Powermetal influences with the power and energy of Death Metal. In short Melodic Death Metal – not unlike the swedes Amon Amarth but with a little more Iron Maiden and classical thrash roots.

MAtW – Looking back to when Asenblut was formed, what do you feel has changed, what was kept and perfected in your music, such as sound or principles ?

When we started we had a way rougher tone due to the lack of funds for a more polished sound. We always tried to sound our best since we felt our music should be heavy and sound generally well. We definitely have less of the classical black and thrash influences in our music than when we started but you can still find blast beats and a lot of tremolo riffs!

MAtW – What was the biggest challenge in the earlier days of the band?

As we started out we where young students or working very independently. So actually the challenges got bigger as the years went by because of life changing events for some members, children, family and changes in jobs and location. So I guess in the early days the challenge was to finance stuff which has gotten better since we are all working in normal jobs now, but a lot of the spare time we used to have is gone so other challenges, as I said, just got way bigger!

We live pretty spread throughout northern Germany, so rehearsing twice a week like we used to is impossible. Writing new material is also harder because we need time to learn and play the songs together. As mentioned the lack of spare time makes it sometimes hard to book shows. Last but not least, with increasing years our expectations of ourselves get even higher, so we need to invest a lot more money and time into things than in the very early days.

We started a little slow since we had to delay our album recording to October. We will just play very few selected shows and refine the new material for our upcoming album which we will record in October with Sound Lodge (God Dethroned, Anvil, Suicide Silence, etc).

MAtW – How has the metal scene in Germany changed since Asenblut was formed?

When we started the viking/pagan scene was at its height. Even back then we where more of a Melodic Death metal band (we called it blackened thrash back in the days) but since our name translates to “Blood of the Aesir” we where considered to be part of this viking/pagan scene. Most of the bands that where around are not even existing anymore and of those few left even fewer are of any interest, I guess. Personally I feel less connected to the scene and the underground since I used to work as a radio moderator but since I stopped in 2013 I got more and more detached. So maybe I am not as aware of newcomers as I used to be – something I definitely miss.

MAtW – What other activities do you indulge in when you’re not doing music / playing?

For me (Tetzel) one of my main focuses is my sport, I am competing as a strongman (currently 6th strongest man in Germany) internationally and want to be part of the “big guys” (maybe the name Hafþór Björnsson, known as the mountain in game of thrones, rings a bell). Sash is a family man and focused on building his house. Claus is a workaholic. Stan is giving guitar lessons and practises 24/7. Last but not least Balrogh is studying to become a teacher and writing lots and lots of music.

MAtW – Is there a genre you really don’t see yourself singing/playing? Or would you try any project that had a completely different vibe and style?

22 year old me would have said there is nothing but metal – nowadays I see it a little different. But since I am a metal musician I don’t see myself venturing into unknown territory any time soon… On the other hand we did a rap song cover with “Nachtblut” which was a lot of fun.

MAtW – How did signing with AFM Records come about?

The head of the label saw us perform at the Rockharz festival in Germany. After the show we sat together and talked and sealed the deal.

MAtW – How has your attitude towards music and your fans change during these 13 years of activity?

If anything at all changed we just appreciate the chance to play live even more.
After a couple of years we felt we need to make some kind of money with our art – nowadays we are more willing to invest and in my opinion the fans see that and share that investment (it`s been years since someone complained about ticket prices as far as I know).

MAtW – Is there more pressure on you now when creating an album than when you started?

Our expectations are definitely higher than ever – we want to improve and deliver – and the new material does just that. So yes, we are pressuring ourselves – from the outside there is “little” pressure that we feel since AFM lets us have our way and our fans where never disappointed as far as I know. The biggest pressure is to perform well when we play live since we have always defined ourselves as a live band and gotten the best feedback when we played shows!

MAtW – Is there a band leader? Or full democracy?

We discuss everything as a full band but the impulses usually are from Claus or Tetzel (often contradicting) – so its kind of a 2 party democracy.

MAtW – How is the creative process split between Asenblut members?

Music is written by Claus and Balrogh and to some extend ideas are put forward by Stan and Sash but Claus refines everything and completes the songs. Lyrics are written by Tetzel.

Hahah. I don’t know if a few words are enough… Tetzel – The face, Claus Cleinkrieg – The nagging voice and guitar master, Stan – The diligent, Sash – The family man, Balrogh – The multi-talent.

MAtW – Any local bands or artists you would like to collaborate with?

We have a few things cooking right now but don’t want to spoil to much. In general we love to work and play with any band that fits with us and wants to play shows!

MAtW – Last question, the random question: if you were not an artist what would you like or see yourself doing?

For me personally exactly the things I am doing right now, being an athlete and making videos (for Youtube and as a marketing producer for the company I work for).

MAtW – Thanks again and hope to see Asenblut live in Romania!

Thank you so much! We are looking forward to it and hope to shake some necks in Romania ASAP!