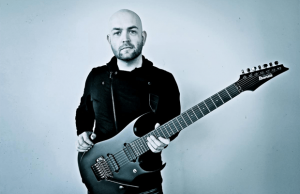 MAtW – Greetings and welcome to Metal Around The World!

MAtW – How are you feeling? I know you have been through a lot with a ruptured ear drum that has made hearing difficult.

Overall I’m feeling good. It’s just been a very frustrating few months with not being able to hear properly with back to back ear infections, but I’m hoping it will be fixed soon so I can continue working on the new album.

MAtW – Your second album “The Human Affliction” is about to be released. What stage is it at?

It’s hard to say, but I would suggest I’m about half way finished at this stage. The process for making this album has been different to any album I’ve done before, in that much of the material is being written, arranged, recorded and mixed as I go along. This is because the album is being considered as a whole, rather than putting together a selection of tracks unrelated to each other. I have a feeling it’s going to come together very quickly towards the end though.

MAtW – I know you were not really planning on releasing one but the ideas kept flowing. Can you give us some details regarding the songs?

There’s going to be 13 tracks on the new album. In the middle of the album is an epic 10 min track titled “Day Of The Droids” which has been fun to write and features some amazing guest solos. The opening track is called “Manufactured Existence”, which like ‘Assimilate Regenerate’ on my debut album, really sets the tone for the rest of the album. There’s also a track called “Messiah Complex” which is really dark and a cyber metal ballad called “Athena”.

MAtW – I know it’s going to be a conceptual album. Could you share the story behind the album? What inspired you?

I don’t want to give away too many of the details just yet, but the story is set in a post-apocalyptic dystopian future. The inspiration is very much centred around the way I feel about the world today though. Particularly technology and the effect it has on humanity and effects it could have in the future, which is a continuation of the concept that inspired “Assimilate Regenerate”. I am a big fan of science fiction and in particular the cyberpunk genre, and I find it very influential for the music I like to write.

MAtW – Should the fans expect a different vibe than on your previous album, “Assimilate Regenerate”?

The new album stylistically continues in the same vein as “Assimilate”, but it’s a lot darker and more epic sounding and in some ways more progressive. There’s also more ambient synths and electronica but at the same time, the album is heavier and more aggressive overall. Fans of “Assimilate Regenerate” wont be disappointed with the new album.

MAtW – You have developed a specific style, and have a unique sound and compositional manner indeed. But could you tell us what is your musical background and mention some of your main influences?

I started playing guitar when I was about 13. I’m originally from the UK
and taught guitar privately and played in bands, until in 1998, I moved to Australia where I primarily worked as a producer and studio musician. Then in 2009, I decided to focus on my own music and teaching practice. I grew up listening to a lot of jazz/fusion and metal music. Many of my early influences were guitar players like Joe Satriani, Steve Vai, Allan Holdsworth, Frank Gambale and Greg Howe and bands like Fear Factory, Dream Theater, Tribal Tech and Megadeth, so my music has alway been an amalgamation of instrumental, metal and fusion styles, especially as you can hear on the 2006 collaboration “Interactive” I did with Australian drummer Grant Collins. But, in recent years my music has leant more towards metal as a way to express myself.

MAtW – Will “The Human Affliction” also be in the instrumental metal genre? Any vocals on it, or any guests featuring on it?

Yes it is all instrumental. No vocals. I am very honoured to have some amazing guests on this new album. Who exactly, I will not reveal just yet!

MAtW – I know you are into teaching and production work. How is that treating you so far?

Teaching has been something I’ve done professionally since I was 15 years old and I would say on some level I will always be a teacher, as I enjoy it. Especially now with the ability to teach students online anywhere in the world it really makes teaching a lot more enjoyable for me. I don’t do as much production work now as when I worked full time in Brisbane studios, but I’m hoping to do more in the future.

MAtW – As an insight, how is the metal scene of Australia, as seen from the inside? (As far as bands, music in general, management, concerts go)

On a whole the metal scene is still fairly small and underground I would say, but I think it’s developing and there is certainly a passion for metal in Australia. We’ve had some great overseas metal bands tour Australia this year and with events like Soundwave show that there can be a really strong turnout at metal shows if the promotion is done properly.

MAtW – Do you play all the instruments on your albums or do you work with other musicians?

At the moment I do everything. Technology has reached a stage where I am able to do everything myself and be happy with the results and I enjoy having complete control. Having said that, I would like to work with other musicians and there is talks of perhaps forming a band next year with vocals.

MAtW – Thank you for your time and the prompt answers. I there is anything you would like to add, please do.