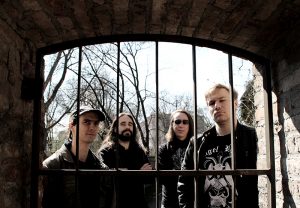 Heavy metal teutons OLYMP are taking no prisoners as they are steadily and gradually soaring towards the Olympus of the Metal gods; their longtime stage experience in various other bands as well as the recent release of their self-titled EP, “Olymp”, are a tell tale sign of their decisiveness, commitment and individuality.

Since the forming back in 2018, Butschi (guitars, vocals), André (bass), Armin (guitars) and Dommi (drums) have been working on original songs in their rehearsal room and have stayed true to an all 80’s traditional style metal that will “make your heads bang wild and will raise even the last skeptic to the peak of Olympus”.

MAtW – Greetings, Olymp and thank you for taking the time to talk to us. It’s a pleasure to be able to run this interview!

You’re welcome, it’s a pleasure for us, too!

MAtW – How does it feel to finally have your self-titled debut EP out, in the world?

Awesome! We are very proud of our debut EP, especially since it’s a completely DIY production done by ourselves.

MAtW – Can you, please, share some technical details? How were the  responsibilities shared within the band, as it was self-produced?

We recorded the instrumental parts live in our rehearsal room. Only the guitar solos and the vocals were recorded separately afterward. The recording setup was mostly arranged by Sebastian. He also did the mixing and mastering, it’s one of his hobbies. Still, every band member gave his input and as such, the sound was involved to the raw sound the EP has.

MAtW – How is music written in general in Olymp? Is it a collaborative process?

Yes, it’s a collaborative process. From time to time someone comes up with riffs or ideas he had at home but most of our songs are almost completely written in our rehearsal room. We jam and out of the sudden one has an idea or a riff. Based on the feeling of this riff, we start to compose a song around it.

MAtW – Who handles the lyrics? What gets harder to pen out the melody or the lyrics?

MAtW – How did Olymp form – can you, please, talk a little about your history together?

We play together now since 2011. Back then, Dommi and Sebastian got a rehearsal room and soon after Armin joined who also brought André into the band. At that time Sebastian didn’t sing and Mascha took over the vocals and we formed Moral Hazard. This lineup lasted until 2018 when Mascha left the band. As a restart and with Sebastian on the vocals we formed Olymp which is German for Olympus.

MAtW – For fans that are new to Olymp, let’s meet everyone in the band!

Dommi is the drummer of the band, Sebastian does the vocals and plays the guitar, Armin is also a guitarist and André plays the bass and does some backing vocals. Dommi, Sebastian, Armin were already friends back in school time. Quite some time now, almost 20 years… bonded by beer haha.

MAtW – Did the musical direction come natural for you or was it something you decided on?

In the beginning of Moral Hazard we kept it more simple, more punk inspired. Our sound involved since then and we keep on involving but always with the focus to play classical heavy metal.

MAtW – For new listeners, how would you describe the musical approach and attitude of Olymp?

Mostly, we want to have fun with our music and make people happy when they’re listening to our stuff. It’s an awesome feeling to hit the stage and rock the fuck out of a crowd.

MAtW – Is there a rehearsal routine?

Yes, there is. Everybody of us has his job and music is a hobby but we try to rehearsal once a week at least.

MAtW – What was your first contact with music and your instruments?

It all started out when becoming a teenager, maybe at the age of 11 or 12. You start to develop your own musical state and back then there was still music on television like VH-1 which had a rock program in the evening. There you could see these great musicians and you just want to be as cool as they are. So, a first contact with our instruments was already during that time, probably in the age of 12-14.

MAtW – Has music always been a part of your life or did you later focus on it?

Yes, music definitely has always been a part of our life. There are so many songs you link to a certain feeling of memory you have, none of us could imagine a life without music.

MAtW – Is either of you involved in any musical or non-musical side-projects?

André is also acting in a theater play and Dommi has a small project with his neighbor but nothing serious. Armin and Sebastian have been lately talking about a thrash metal project, but we will see.

MAtW – To what extent has Olymp adapted to the current scene and are there changes/compromises that you’re unwilling to make?

We don’t adapt to the current scene, yet we’re in a good time with traditional heavy metal being quite popular now luckily. But we have to disappoint you, you will never see us in skintight spandex – haha.

MAtW – How do you define success? Is it the freedom to write and play the music that you want or something else?

The freedom to write and play the music we want is definitely a huge benefit. Unluckily not everybody on this world has this privilege. For us personally, we want to play as many concerts as possible, concerts always feel like a great success.

MAtW – What do you find challenging in being an artist, both on a positive spin and a negative one?

On a positive spin, the challenge that not every piece of music you create sounds the same. It keeps you pushing forward and forces you to be creative. On a negative spin, the fact that we need to have a job to be artists – haha.

MAtW – Gaming scores VS movie scores? (as music fans and musicians). Any favorite ones?

Overall movie scores (Rocky!) but the soundtrack of Duke Nukem 3D is impossible to beat…

MAtW – What do you find more pleasure in: interpretation or writing?

Writing, we write all our songs by ourselves.

MAtW – What makes your instrument the best (:P)

The player who plays it – haha.

MAtW – What would be the best place for live shows in Germany?

The Ballonfabrik in Augsburg! Great bands and beer for little money.

MAtW – Just how much freedom is there when it comes to writing a song? Is there a leader in the band?

In fact there’s a lot of freedom, every idea is considered. There’s no leader in the band. Ok, Sebastian and Armin sometimes have to be slowed downed as they are arguing for minutes about the new song should sound like and suddenly just say “Got it? – Yeah! Ok let’s try everyone” – haha the faces of Dommi and André are priceless in moments like these as they have no idea what Sebastian and Armin were talking about.

MAtW – What is your claim to fame as musicians and individuals?

We’re right from the underworld of Hades, that’s pretty cool. And wait until science is ready for creating three-headed dogs!

MAtW – Is there room for egos in your band? Can attitude ever be used in a constructive manner?

It probably can but it wouldn’t work out in our band. So no, there’s no room for egos in our band.

MAtW – Do you have any pre-show routines?

Oh yes, we always drink “Pfeffi”, an Eastern Germany liqueur, before hitting the stage. You kind of have a fresh feeling in your mouth after you drank it. Like brushing your teeth with peppermint toothpaste. Just awesome!

MAtW – There are some shows already lined up for Olymp. Any other plans in the near future?

Yes, we still work one or two new songs for an upcoming album. If everything works out well, we can start recording by the beginning of next year and release our first full length album by the end of next year.

MAtW – Time for the last question, the RANDOM question: If you could have an endless supply of one thing, what would it be? (…maybe besides beer, to make it easier)

Haha, you knew that the answer would be beer. Ok, let’s take Pfeffi then!

MAtW – Thank you once again, and in case there is anything else you would like to mention, or anyone to thank to, please, do so!

Thank you for this nice interview and a big thanks to everybody out there for supporting us. Stay heavy!