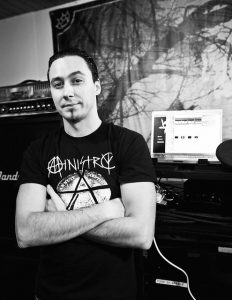 MAtW – Hello Mircea, what are you currently up to?

Hello there – I’ve got my working gloves on, if you may, in the middle of establishing a new business and writing music for Blood Eagle.

MAtW – Please tell us a few things about Blood Eagle? How did the band form and where did the idea of this project stem from?

In 2010 when I used to live in the Northern part of Denmark I went for a visit in the capital of Denmark, which is Copenhagen. I always hated the capital, for some odd reason, but I had to get a breath of fresh air, cause I was not thriving in the North. I went to visit my good friend Franz, which used to guitartech for Mnemic for a couple of years. The more I went and got around in Copenhagen, the more I fell in love with the city, and thought to my self that it would be a great place to actually live in. I also came to think of that Mikael Ehlert (the old Hatsphere bass player) just moved to Copenhagen, and that Morten (drummer from Raunchy) already lived there. These where the most charismatic and fun guys to hang with, and I’ve always had a good time with them. Since the vibe was always great with those guys, why not make the move and create a band together for shits and giggles. I suggested this to Franz and since this was a no brainer for both of us, he immediately agreed, and we started jamming on material. This was before actually asking the other guys if they would consider jamming with us. Instead one night we invited them out to go for a drinking frenzy, and everybody boarded ship. This was in around December 2010, we rehearsed in 2011 and in 2012 we recorded 5 songs at the Antfarm Studios without a singer or a band name. The initial singer who we wanted to be part of the band was our old-time friend Jacob Bredahl (ex- Hatesphere singer), but it turned out that he was not in the same mindset as the rest of us, and we couldn’t make it work. It wasn’t until 2013 that we actually found a singer, which is the 22 year old youngster Michael Olsson (also from Caro).

MAtW – Could you share some details related to the “Blood Eagle” EP?

Definitely, its quite simple, its a 3 song EP recorded with Tue Madsen at the Antfarm Studios, whom we’ve all worked with from our previous bands. He produced many other bands as well, such as Rob Halford, The Haunted, Dark Tranquility, Dir En Grey etc… just for the namedropping sake. The EP can be downloaded completely and entirely for free from this website: http://site.bloodeagle.info – if you like it go to our Facebook page and give us a shout out, we would appreciate it.

MAtW – Can you detail some memories for this record?

I have very fond memories of this time. It was in 2012 and we where finishing up the latest Mnemic album. We finished a couple of days earlier, before the deadline, so when everybody wrapped up and left, I was the only one left in the studio. Eventually I called up the other guys, from back then the un-named Blood Eagle, and we ended up recording 5 songs, and having a really great time with both Tue and his family. It was a breath of fresh air, cause everybody stayed at Tues place – it reminded me of the early days of Mnemic and how we used to record.

MAtW- Are you guys planning on releasing a full album?

We are definitely working on it, at the time being we are looking at different strategies on how to release it and when. It might be a while, cause we are taking this in our rhythm and pace.

MAtW – For the people that still have not listened to you, describe the band in a few words, what makes it distinctive?

That’s very individual, but I would say for me, its inspired by the old death metal days from the 90’s, with of course a bit of a modern twist. Its a rehash of all the good old death metal riffs, and absolutely nothing new under the sun. The only difference is that we know our craft, and didn’t just start yesterday, so we can easily distinguish the good from the bad and so on. I guess you can say, without sounding too arrogant about it, that our analytical skills have already been developed, compared to all the other bands that start out these days.

MAtW – Did the musical direction come natural or was it something you decided on?

We actually didn’t know where we would go, in terms of style when we started jamming. In the beginning it was very thrashy, more like the old Hatesphere, but none of us wanted to take that road. In conclusive we are all suckers for old school death metal, especially Morbid Angel, Carcass, Bolt Thrower and Napalm Death – all of those bands that got released on Earache back in the day. When thats said, we are also big fans of both Mastodon, Slayer and Neurosis, speaking of a more modern twist. When we come up with a riff or a riffstructure, everything is evolving on a specific tangent, we follow that path and churn out the material accordingly to it. In other words yes, the writing does comes natural. We all agree on the compositions, due to our common vision which comes from our inspirational fundament comprised of the aforementioned bands.

MAtW – Any shows lined up for Blood Eagle?

We are working on shows for the summer and the fall. Right now the focus is to write a full length album.

MAtW- What are some musical aspects still unexplored by you?

I think I might have explored all my musical aspects, I mean I have never played black metal, and that would be a fun thing to do, but maybe in another life. As far as playing my instrument, as a guitarist, I think I pretty much have regressed to my death metal roots since I started BLOOD EAGLE.

MAtW – When do you decide that some ideas / experimental bits are to be used in a song? When do you feel that parts are morphing into a full composition?

When it feels right? This is tacit knowledge, its something I can’t really explain. Music is an intangible entity, its something that touches us, its a feeling. In a composition its all about dynamics, for me, but also about specific structure as a basic fundament, which goes for all compositions. In the end it is also a question of the genre and the vision of the composition, so its basically many parameters to take into consideration. Its of course not rocket science, and also the best way to measure the temperature is also when you compose with other musicians.

MAtW – What made you become a guitarist? What motivates you to still be one?

I saw Alice Cooper on TV when I was 9, and at the same time one of my dads friends gave me a cassette tape of Deep Purple’s “Stormbringer” album. From there on I got into more extreme music such as Morbid Angel and Suffocation, so I think its a whole list of accidents that led me to play guitar. What motivates me nowadays is that after a hard days work (working behind a computer screen) I am able to leave my office and go to the rehearsal to play some very loud death metal – its more of a sport nowadays, and I don’t mean that in any condescending way. To be honest with you, I never touch my guitar at home, I have even uninstalled every recording software I have, because I simply do not have the time to compose. So everything is done the old school way, in the rehearsal, and I think that is a very healthy thing to do nowadays, where everything is digitalized and produced like an assembly line.

MAtW – Are there differences between the raw ideas you guys go into the studio with and the final output? (overdubbing)

Actually no, for the EP we just plugged and played. We didn’t even want it mixed or mastered to begin with. We just wanted it as raw as possible.

MAtW – Is there room for egos in band? Can attitude ever be used in a constructive manner?

Attitude can always be used in a constructive manner, as long as its used with respect and empathy. Big egos for that matter, are for the ignorant or juvenile and those are not part of where we come from. We are too old for that.

MAtW – Have you ever considered an all instrumental, solo album?

No – I think those things are ridiculous, unless you are someone that actually lives off of throwing one million tones out of your instrument because you in fact invented something completely groundbreaking and new. I am not that great of a guitar player, I just have a certain feeling of what sounds good to me, but can’t always necessarily play it. I actually barely have the time to play nowadays, and that might sound conflicting, but its the truth. I don’t take the music business serious any longer, or as I used to. I think the market is over saturated with more products than music, and flooded with too much business. There is a market out there, but the business strategy is lacking, if you want to make money as a musician. Everybody is running in circles, trying to make an album as fast as possible, in order to be able to tour, to pay their rent. Thats a completely different story….

MAtW – Do you have any pre show routines?

Warm up for 10 min playing a song, drink a shot of vodka, and thats pretty much it.

MAtW – Last question, the random question. Your “ideal” dystopic world would be an alien ridden world or robot domination?

I think neither, dystopia to me equals to modern day slavery, which is something we already live in. We have technology to make life easier and better for all of us, but unfortunately mass inequality and poverty all over the world is a daily fact, a fact that we ignore.