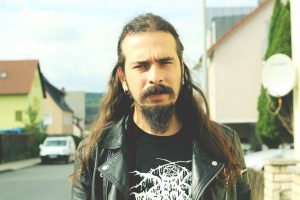 Tir is a Dungeon Synth one-man project, formed in 2016 by Turkish mastermind, Oytun Bektaş, a dedicated performer and listener for more than 20 years.

Click HERE for the full review of “Urd, Skuld & Verdandi”.

MAtW – Greetings and thank you for taking the time to do this interview. Can you share the history of Tir for fans that are just discovering your work?

Tir was founded in 2016. It is a one-man project and I have determined its style as dark art. Structurally, we can call it Dungeon Synth.

MAtW – Your latest album, “Urd, Skuld & Verdandi”, was released this May (2019). How do you feel you have grown as a musician since your first album, “Mountains”?

All the seeds of the second album began to be sown after the first album was finished. In fact, I have been in the same spot since 2016. I just started using new elements musically. Inevitably technical things are changing and evolving. I continue to transfer my energy without giving up my minimal understanding.

MAtW – For new listeners how would you describe your sound ?

If a category is required, we can say Dungeon Synth/Dark Folk.

The album was mixed and mastered by Markus Stock (Empyrium, The Vision Bleak, Sun of the Sleepless), and Thomas Helm (Empyrium, Noekk) sang on two songs. Studio E (Klangschmiede Studio E) was used to record the vocals. I worked with Caner from Kestawur Production for the art design of the album. I believe we did a good job.

MAtW – What made you choose the Norns inspired title?

In fact, this is a bit philosophical. I believe in my transformation. The fact of birth reminds me of immediate death. But this is a physical act of death. So it doesn’t destroy life on its own. An unstoppable, unthinkable cycle. It is not be limited even in time. The name of the album includes limitlessness and nothingness in this sense.

As you said, I am alone and I will continue to be alone under the Tir project.

MAtW – There are a lot of folk and black metal overtones. Does this balance come from particular sources or your own mood?

We are all products of nature. Even though we live in cities, villages or under ridiculous political systems, we are part of this cycle. This complex and simple state that created Tir of course I would like to say that I was inspired and nurtured by Black Metal musically Because dark art is actually very close to these elements as the soul. My perspective on art is shaped in this direction. Lean but hard!

MAtW – As multi instrumentalist, do you have an affinity for a particular instrument or technique?

I learned trombone many years ago. Besides that, I play piano and guitar.

MAtW – What makes a band or album great in your opinion?

I guess that answer varies with everyone. But for me, it’s absolutely minimal and underground. Good production doesn’t necessarily mean a successful album. There are many examples of this. For example, Dimmu Borgir, Amorphis and more. I think they have been removed from this market with the 2000s, even though the big ones are giving flashy concerts! No qualification.

MAtW – Let’s talk a little about the Empyrium Türkiye. Is that a side project?

Definitely No . This is the work of our friendship with Markus and Thomas. A small but pleasant help page. I enjoy it, nothing commercial or similar.

MAtW – How did you all start working together?

While in the Rhön forests, Markus wanted to take on the album’s master. I gladly accepted. I wanted the album to be instrumental in general, but I was very happy that Thomas said that he might be involved in vocals. Because a couple of the songs really suited his voice. That’s how it happened!

MAtW – What drew you to play this particular style – Dungeon Synth?

I get a lot of inspiration from Wongraven (Fjelltronen) and Burzum (Dauði_Baldrs). The inspiration is undeniable. These albums I listened to about 20 years ago are definitely masterpieces. This minimal aspect of dark art was definitely my greatest influence

MAtW – What is your musical background and what was your first contact with music?

I think I’m a little lucky about that. There was a local orchestra where I lived and my family asked me to join. I was 8 years old. I learned to play piano, flute and trombone respectively. On the other hand, I took 2 years of singing training. They were good years.

MAtW – Where do you usually draw inspiration from, for the instrumental pieces?

I’m a fan of classical music. Wagner is especially important to me. As for my music, I believe that the best way to describe nature, mystical and mythological elements in itself is definitely ‘real’ instruments. That’s why I prefer not to include artificial sounds that are not real. Sometimes a tree hails to the wind reminds me of a cello tone.

MAtW – Your 2016 album, “Mountains” is going to be reissued? What are some technical aspects regarding this process?

Yes, the album will be released digitally on October 4th. All the tracks were re-played and I added more instruments. There are some surprises, of course. The album will be released on limited cassette and deluxe CD format the Repose Records label. If I had to portray the album, it was a typical Dungeon Synth work, but I think its dark image is a little more forward. I also undertook the mix and master of the album myself. It was a new experience for me.

MAtW – Your music is very powerful and evocative. If one of the themes off “Urd, Skuld & Verdandi” were to be used for a movie, what song would that be and what movie (genre or title) would go with it?

I wish it could be used for any Kubrick movie. You decide which song suits it 🙂